You can add HTML directly into this element to render on the page.

Just edit this element to add your own HTML.

FCB1200 has developed a patent-pending fire containment bag (and thermal gloves)
for quarantining spontaneous ignition of laptops and/or any other Lithium-Ion battery
products. If you are not aware, there have been numerous cases in which the Lithium-
Ion batteries in laptops have ignited spewing 4’ – 6’ flames as the internal cells
spontaneously ignite. Whereas the FAA simplistically advocates dousing the initial fire​...

​FCB 1200 conducted a worst case scenario test with no attempt to knock down the initial fire to prove the effectiveness of their product. Click here to see the full unedited test conducted in a FAA/DoD certified test facility.

“Tests have shown that even with a very high ventilation rate (1 air exchange/minute), a typical COTS Li-Ion battery could pose a significant hazard  within the flight deck environment and could potentially present a catastrophic risk.” 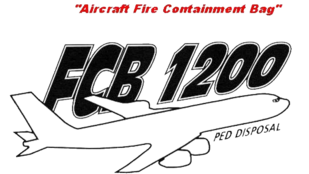